Hoppy got her name the night the raccoon came and stole her two sisters. At first it seemed she’d survived unscathed, but she tucked her left leg up to her belly and perambulated unilaterally from then on.

A responsible chicken keeper doesn’t tolerate weakness in the flock. Weak birds spread disease, embolden predators and harbour parasites.
But I didn’t want to cull a sweet little bird who got around ok, seemed to enjoy life, and even laid the odd small brown egg. So Hoppy carried on, through the fall, winter, spring and summer, keeping out of the mean birds’ way, and living her quiet little life. She was at the very bottom of the pecking order though, and over the course of the year she began to fade.

Hoppy slept in a nest box, and in the mornings, while the rest of the flock piled outside to gulp down breakfast, she would totter on the edge of her nest, steeling herself to hop down the ramp into the melee, heading for “her” stump, where she’d spend the bulk of the day. I got into the habit of scooping her up and carrying her over to her stump and spoonful of fermented feed. Despite the TLC, over time her feathers dulled, she thinned and slowed down, and the other birds, including now even her rooster, beat her regularly. Reluctantly, I started to think about culling again.

October came, and with the shortening days, I began free ranging two flocks together. One evening, Hoppy didn’t return to the layer coop, and there was no little chicken to carry to breakfast in the morning. I figured a hawk had taken her from the field.
But nope, she just couldn’t take life with the layer flock any more, and she had moved over to the coloured egg coop, led by my big gentle BC Marans rooster. Since no one in her new flock seemed to mind, and her old flock was happy to see her go, I left her there.
It is very unusual for a chicken, hatched and raised in one flock, to freely join a new one. But Hoppy had bravely decided she needed some new scenery, and some new friends.
It has been more than a year now, and Hoppy has gained her asylum. She hangs out with her flock mates, shyly, and moving more slowly for sure, but part of the flock, not chained to a lonely stump by sharp beaks and heavy wings. She has a twinkle in her eye and a spring to her step. Good for you Hoppy, it takes great courage to leave even the unhappiest of homes and depend on the kindness of strangers. I’m glad it is working out. 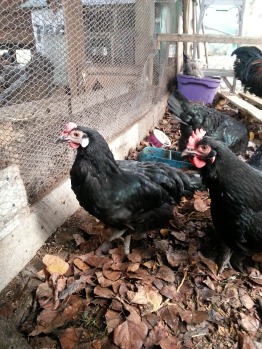 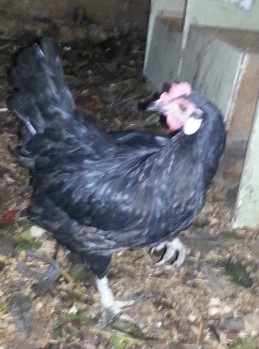