Our local predators know where all the chickens in the neighbourhood live, and drop by the barnyard often, to scout our defenses.

The eagles, turkey vultures, ravens and hawks attack from above, picking off one bird at a time. Our trees and roofed pens slow them down some, but they usually grab a few chicken dinners each year.

If they can get in, raccoons and mink will wipe out a whole coop in minutes. Chickens aren’t equipped for hand to hand combat. Mink, the little monsters, will stack the bodies in a neat pile. Mink are just plain weird, and wow they have crazy eyes. I know…I played chicken-tug-of-war with one last summer. The chicken didn’t make it, but I sure got a good look at the mink.

In retrospect, I am happy that I ended up with a few smaller coops instead of one big one, because this way I will never lose my whole flock to a single ground troop assault. A predator would never be methodical enough to break into one coop after another.

Every afternoon around one o’clock, I let the flocks out to free range until dusk and when the sun sets, they put themselves to bed. Free ranging helps to keep them safer too. One or two might get nabbed, but good luck to any predator trying to chase forty chickens heading off at top speed in forty different directions. Strange as it sounds, I think my chickens might be safest when they are roaming free.

The dogs and I are often out puttering in the barnyard when an eagle or raven flies over. And that is when something really cool happens. Our barnyard community, the birds, the dogs and me, all connect, and communicate, and react as a unit to the enemy at the gate.

It’s usually a rooster who first raises the alarm, growling loud and long. We all know exactly what he means.  Others begin to echo him, and as the low rumbling chicken growl swells and rolls across the barnyard, everyone freezes. A pause ensues while we each pinpoint the threat and then we all snap into action.

The birds under cover stand stock still. The birds out in the open swerve for cover, while Chance and Liza run out from under the trees and give chase, craning their necks to keep the bad guy in sight, and barking hysterically at the threat high above them. I get into the act too, raising my arm and in my best growly voice ordering the predator to be gone. This has no effect on anything, but it makes me feel useful, and a part of the high drama playing out around me.

The dogs are usually enough to send the enemy on his way, and then we all settle back down, satisfied at having vanquished the threat once again. 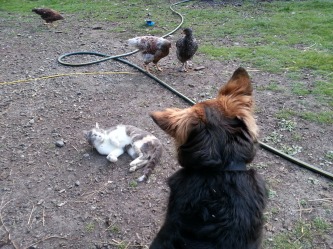