When I was growing up, Mom kept a bulletin board by our kitchen telephone. It held school notices and interesting items clipped from the newspaper. It held an annotated calendar, scheduling all our family’s games, practices, meetings and appointments. It even set out my sister and my “horse days”. We rode on alternate days, a fair solution to our one-horse-two-riders issue.

This was before computers, and one of my Mom’s most prized possessions was her ancient boat anchor of a typewriter. She liked to type up and post quotes she found to be inspirational, always, of course, with proper attribution. Credit where credit was due!

All us kids absorbed Mom’s quotes as we spent hours tethered by the handset’s springy curly cord to that plastic box on the wall. Sprawling on the floor, balancing on the counter, slouching on the stool gazing into space, and at the bulletin board. I never gave even a passing thought to privacy back then, I just chattered away gaily to my friends, and as I grew older, to my boyfriends. How quaint it all seems now.

Mom died in 2012, she would have been 78 this year. The bulletin board, the landline wall phone, the kitchen in my childhood home; it’s all gone, along with my youth.

But I still have my memories, and my Mom’s quotes. She had bundled them together with a metal clip and tucked them away, we found them while sorting stuff after her death. We used some of them on her memorial service brochure. We read them for comfort in the first days of our loss. Her grand daughter now has some of Grandma’s words tattooed down her side.

It is quite something how those words my Mom loved and shared with her family have taken on a life of their own. I think she would enjoy that. 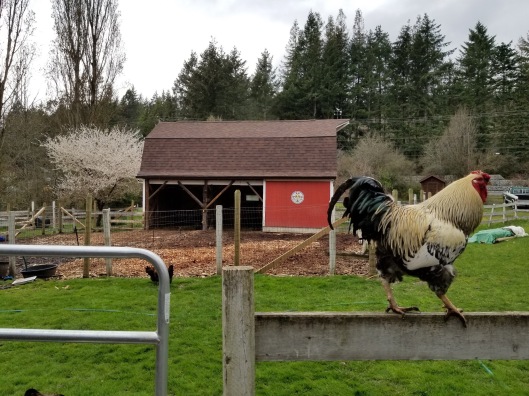 We were jolted away from our various pursuits yesterday afternoon by an ungodly screaming coming from the barnyard. It sounded as though one of the dogs had been kicked by an angry donkey, or hit by a car, or attacked by a cougar or bear!

I was working in my office, so ran to a west-facing window to see what was going on. B was puttering around the house, he headed for the back deck. K was closest, re-fortifying a veggie patch fence against chicken depredations. Reaching the scene first, she found a terrified little dog, shaking like a leaf behind the barn.

Putting two and two together, and in the complete absence of killer cars, equines, cougars or bears, she surmised that poor Chance must have become tangled in the electric fence gate, which hung loosely at the corner of the barn. Ouch, that would have been a shock.

Relieved that no lasting damage appeared to have been done, we returned to our various tasks. Chance stayed out with K, refusing to venture more than three feet from her side the rest of the afternoon. After supper, he glued himself to me all evening, even choosing to follow me to bed (his kennel is just outside our room) rather than than stay up late, like he usually does, with B.

This morning, and in the general excitement, he forgot his fear long enough to make it out the back door with Liza and me, but out in the barnyard, when I looked for him a little while later, he was nowhere in sight. He had retreated to the carport, where he cowered, waiting for another bolt out of the blue.

Later in the morning, I once more headed outside. This time, he came as far as the stairs, and, with a great deal more encouragement, as far as the back door, but that was it. No further would he go.

Poor little guy, he sure has been spooked. One of his favourite places on earth has morphed into a dystopian nightmare where excruciating pain strikes at random. Oh the unpredictability and inexplicability of it all! I wonder how long before he forgets, and takes up his crown to be king of his small kingdom again. Not too long I hope. 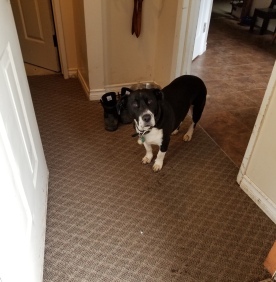 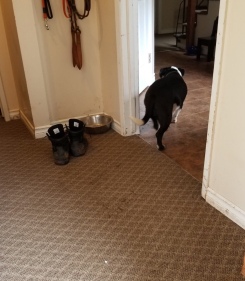