I walked into the thrift shop next door to the feed store and noticed her immediately, sitting in the window. A pleasingly round hen-on-nest covered dish, iridescent blue carnival glass, glinting in the sunshine. Vintage. Glass. Poultry. Three of my favourite things. What else could I do? I scooped her up, took her home and set her on the piano, where I could admire her from my chair. 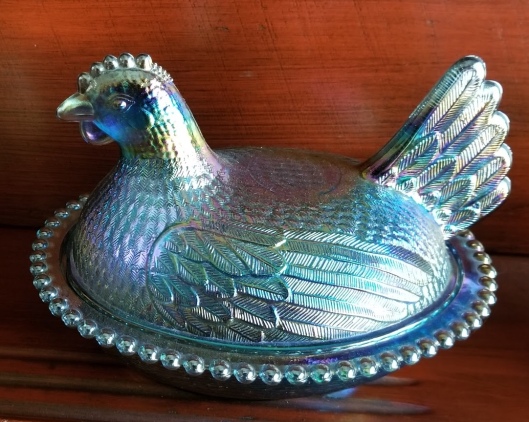 Fast forward a couple months and a parcel arrives in the mail from my cousin who loves to send random gifts. (You should all be so lucky as to have such a cousin). Vintage knitting books, a few interesting-looking novels and (gasp!) another hen-on-nest dish! This one smaller, clear glass with a red painted comb and wattles.

Growing curious about their provenance I examined each for maker’s marks, finding none. Google image search turned up nothing either, but when I typed “lidded glass chicken dish” into eBay, I hit the jackpot. There were 13 available and the top listing was twin to my three dollar thrift store find (score!). 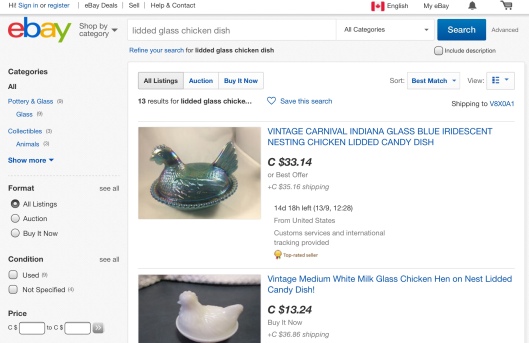 I learned the manufacturer’s name (Indiana Glass) from the eBay listings, then searched up the company. The website glassbottlemarks.com popped up, and I proceeded to learn more than I ever thought possible about hen-on-nest dishes. 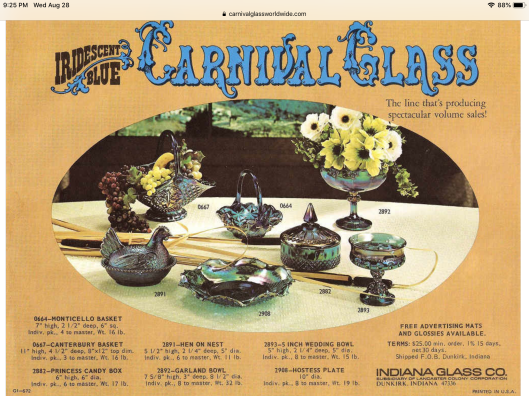 One line in the article I read really intrigued me, and its dramatic use of uppercase and italics made me smile:

“The smaller version (commonly known by hen-on-nest collectors as the “MYSTERY HEN”) is considered as a “PROBABLE” product of Hazel-Atlas Glass Company instead of Indiana Glass Company by author Shirley Smith in her authoritative 2007 reference book on hen dishes.”

Wow. So. Let’s unpack this.

There is enough interest out there in hen dishes, that:

Oh, the intrigue! I can scarcely catch my breath! How exciting!

Seriously though, isn’t the world a wonderful place? Where one can discover the quaint existence of hen-on-nest enthusiasts and read all about their little chicken dish dramas?

I wouldn’t exactly call me a hen-on-nest enthusiast, not yet anyway. I’m currently teetering on the edge. It wouldn’t take much to push me over though, like, maybe if I find a THIRD hen-on-nest. Because then, of course, I would have to try for number four!

Our resident gardener planted lots of pickling cukes this year, and they all grew. We  are absolutely inundated! Every few days, the garden disgorges another big basketful, as RG discovers another plant twining along in some random corner. The enthusiastic tone of her “I found another patch” announcements has steadily diminished over time. One can only use so many pickling cukes.

Mason jars full of fermenting salt brine pickles are stacked all over my sewing table, friends and family are sharing in the bounty and the chickens are enjoying the ones that grew too big to pickle before they were located. And they Just. Keep. Coming.

Last night, in an attempt to gain the upper hand over the cucumber avalanche, RG gathered up every cuke on hand and came next door to use our big kitchen. It was time to scale up she decided, and make a whole crock full of pickles. After a bit of thought, we pulled out our tall glass kombucha vessel. It would do quite well. We have lots of big pots, but metal won’t work for making pickles. She scrubbed the kombucha vessel thoroughly and filled it with a big batch of pickles, topped and bottomed with fresh grape leaves for tannin (to keep ‘em crispy).

Ten days or so on the counter, then into jars and the fridge, and we’ll have healthy fermented probiotic pickles and pickle juice good for up to a year, if they last that long (they won’t). In the meantime I am enjoying the beautiful pickle tower decorating my kitchen, glinting green on the counter, filled with quiet purpose as a billion friendly bacteria do their job. Tiny bubbles forming and shifting as the fermenting process unfolds.

One of my cousins has been crazy about pickles his whole life. A true pickle connoisseur, he makes his own, he wins pickling prizes at the fair; the man even owns a pickle suit.  If anyone can appreciate a good pickle, it’s cousin D. I will have to make sure he gets a jar. Especially since RG is already boasting about how her pickles are probably better than his. Are we on the verge of a pickle smackdown? Only time will tell…😘

My daughter recently lent me some Zen Buddhism books, and one of the ideas I love is Tao. Tao is the idea that for everything there is an equal counterbalancing opposite, and that these opposites are not separate, but rather different aspects of the same thing. That nothing can exist without its polar opposite, and that this polarity is what our world consists of. The art of life, therefore, is keeping the two poles in balance. Taking the middle way.

I find this concept comforting. To imagine, as I confront our world’s evil via my newsfeed, that for every Bolsanado-empowered logger chopping down the Amazon there is a squad of earnest tree planters digging their heels in; for every ICE gang rounding up and separating families there are good and generous people giving refuge to the stateless and the homeless; that for every senseless act of violence inflicted on the innocent there is, somewhere, a random act of kindness unfolding.

Today I received an unexpected gift, a little Tao right here in my own neighbourhood.

A while ago I wrote a blog post about patience.  About needing plenty, to accept a loud, unthinking family who barged into our neighbourhood, bought a big house on top of a thickly forested hill, and proceeded to chop almost the whole forest down to build a wide gravel parking lot. After a couple years of practicing patience with the neighbours to preserve my own peace of mind, I was rewarded with the pleasure of their departure, and the arrival of an unobtrusive new neighbour whom, two years later, I have yet to meet.

The hill’s life energy changed after it was shaved and capped with road-base. There were more casualties as some of the few remaining trees on its flanks sickened and died. I watched this collateral damage play out in extreme slow mo, as I sat every day contemplating the view from my bathroom window. I wondered if and when someone would come to drop the dead snags. Or if a storm would fell them first.

Today I got my answer. I was standing in the kitchen at bang on ten am when the chainsaws fired up, growling their threats to the neighbourhood, and causing more folks than just me I’m sure, to think “uh oh, who’s at it now?” We have all learned to be a little chainsaw-shy around here in recent years. We love our tree canopy. I grabbed a fresh cup of coffee and my cell phone and headed outside, following my ears to find out which neighbour had welcomed the invaders.

Sure enough, the fallers were just down the road on the neighbour’s hillside, one up a tree and one on the ground, taking care of those snags. “Fair enough” I thought to myself. “Those trees do have to go before someone gets squished.” I would be sad to lose my tall bathroom window snag, and the local eagles and vultures would be sorry to lose their lookout post, but far better a controlled demise than an accidental unfortunately-timed one across the public path at the foot of the hill.

I grabbed a chair, turned on my camera and sipped my coffee as I waited for a photo opportunity. It would be fun to write a little follow up to Patience, to relate another chapter. I watched the faller slowly climb, stopping to carve off each branch as he encountered it, pausing as each crashed into the underbrush, then resuming his slow ascension. About thirty feet from the top, he sliced the treetop clean off and we all watched it crash down, bouncing on top of the lower branches now carpeting the slope. 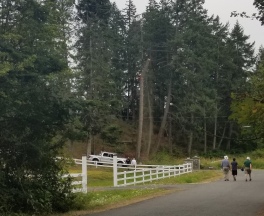 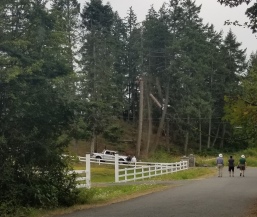 By this time, the faller on the ground had been joined by my new neighbour, a snowy haired old fellow, and both watched the guy up in the tree intently as he reversed direction, slowly descending, stopping every 10-12 feet to slice and send another chunk crashing down. When he had about thirty feet to go, the guy on the ground called up to him. I couldn’t clearly hear what was said, but I saw hands chopping diagonally and my ears caught the word ‘angle’ as the wind wafted it by.

The next cut was duly made on an angle, so that I could clearly see the pale insides of the snag, and then the saw stopped growling entirely and the faller moved on down the last stretch of trunk.

That’s when I understood, the owner had asked the fallers to leave the remaining snag as a wildlife tree. Amazing, what a gift! I was so happy! Anyone who knows about wildlife habitats knows that it is best to leave snags standing if possible. Each one can support a plethora of flora and fauna as it slowly decays. What a good act. My new neighbour, doing his part to both keep local trail-walkers safe, and support nature. He embodies the polar opposite of my old neighbour. Balance. Tao, as in all the fabric of our universe.

I find that peculiarly reassuring, don’t you? 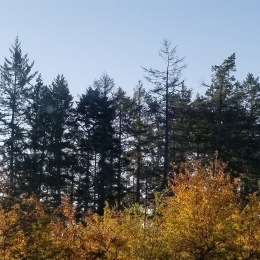 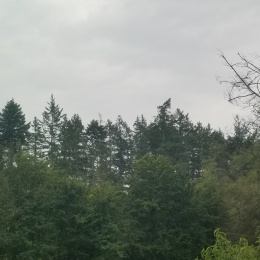 I’ve written before how me and my sister became enamoured with and acquired our glass mason jar lids. And how some of the old ones don’t fit today’s mason jars. In what has been an extremely satisfying development, I found a new use for these old odd-sized glass lids today.

I started my first batch of pickles ever this afternoon. Not your standard hot-vinegar canned type pickles, but hippie-style brine fermented pickles. With grape leaves top and bottom to add tannin. The plan is that they will bubble and stew at room temperature, and turn into delicious pickles, and hopefully grow all sorts of happy healthy probiotics along the way.

Our resident gardener fermented pickles last year. Not only were they delicious, we used the brine as a probiotic electrolytic pick-me-up, like concentrated pickle Gatorade. So this year, after the second big armful of pickling cucumbers hit my kitchen counter accompanied by the usual “veggie delivery!” cry, I decided that pickles were in my near future.

RG shared her online recipes, handed me her bag of pickling spice, her dill and her non-iodized salt and finally, brought me one more armful of pickling cukes.  I was ready to begin.

It was as I was fitting the top grape leaves into the jars, trying to tuck them in so that, as RG had instructed, they were “like a cap, keeping the pickles totally submerged”, while thinking wistfully about the fancy set of glass pickle weights I had seen in the Lee Valley catalogue, that I remembered those glass lids. They would make perfect weights, if they fit!

And eureka, they did!

I’m going to have to hustle on back to that place with the whole basket of odd shaped glass lids, cheap because there are no jars they fit, and pick me up a few more pickle weights. A lot better price than Lee Valley, I can tell you that! Probably grab some for my sis and RG too.