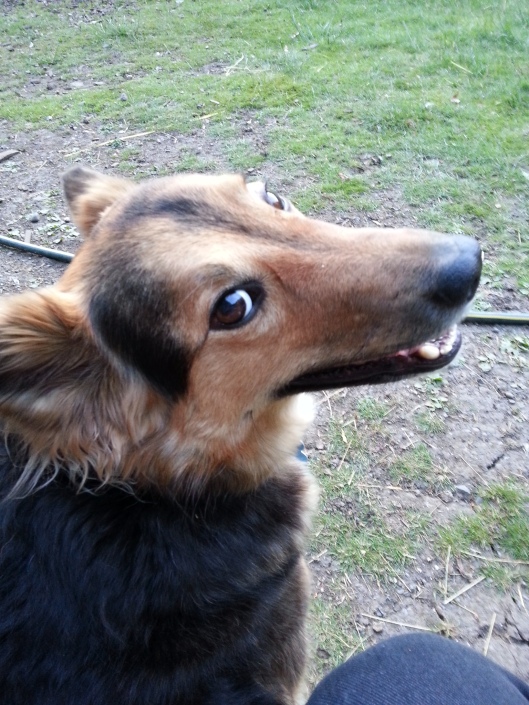 Late last night while peacefully practicing yoga,  Resident Gardener became aware of a new voice blending into her music. Glancing up, she saw Liza vibrating at the door. Understanding instantly, she dove for the doorknob, flung open the tiny house door, and urged “Go get ‘em Liza!!”

Liza was off like a shot, silently beelining at top speed through the dark to the coops. RG wasn’t far behind, pausing only to push her feet into her boots and grab her headlamp (that truly indispensable piece of wintertime barnyard equipment). They found the cream legbar pen door slightly ajar, nervously manned by a excited young rooster while his three terrified hens hid at the back.

Earlier that evening, I had apparently neglected to latch the door firmly. An opportunistic predator, out testing latches at midnight like a prowler trying car doors, had discovered, no doubt to its great delight, an unlatched door behind which slept four tasty hens and a plump rooster. The birds had woken, loudly protesting the attempted kidnapping, and this had alerted Liza.

With zero insight into how many legbars were supposed to be in that pen, and me fast asleep at the big house, RG looked around, trying to figure out if any birds were missing. Meanwhile Liza, way ahead as usual, drew RG’s attention to the trail of feathers leading across the winter field towards the road and the wildlife corridor that runs alongside – aka ‘Raccoon Alley’.

Understanding now that at least one bird was out, RG latched the pen door, then followed the trail, which petered out. They hunted around fruitlessly for a bit, then gave up and headed inside. It seemed that some lucky raccoon family would be enjoying legbar for dinner that evening.

A while later, the chicken racket started up again, and again RG and Liza bounded outside, to find nothing new amiss. The coops were all shut up tight, and the missing hen was still nowhere to be found. RG speculated to herself that the noise must have been the poor hen’s last hurrah, coming from somewhere down Raccoon Alley.

At bedtime, as RG was peeing the puppy before kennelling him for the night, she caught a small red eye reflected in her headlamp light, up in the tall grass behind the barn, where (generally speaking) small red eyes do not typically lurk. Yup, it was the missing hen, still in one piece and vainly trying to hide. Putting the puppy inside to free both her hands, and grabbing the chicken net from its hook by the main coop, RG caught the hen, who, for the third time that evening, protested loudly. “Hey silly hen” RG admonished, “shush up now, this really is your best case scenario.”

I’ll say! If not for Liza and her handler, this chicken story could have had a very different ending, with at least one hen and possibly the entire legbar breeding group taken out at the very start of breeding season. Phew! Disaster averted!

This has been a good reminder. I will have to be more careful. The many predators that call our valley home have families to feed too. They will take advantage of my complacency every time.

Thank goodness for Liza, the best livestock guardian dog ever. Hopefully one day puppy Arrow will be as good at his work. 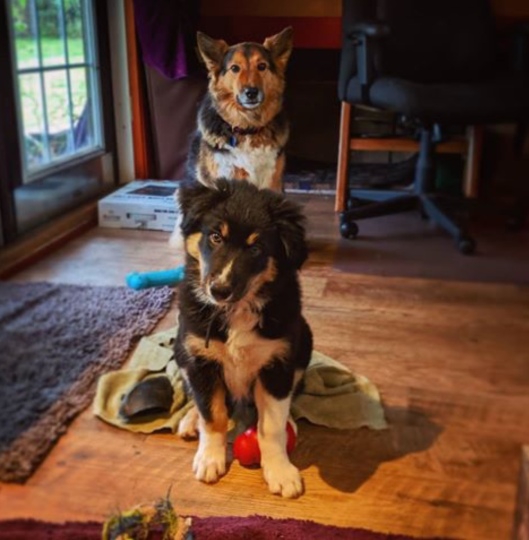 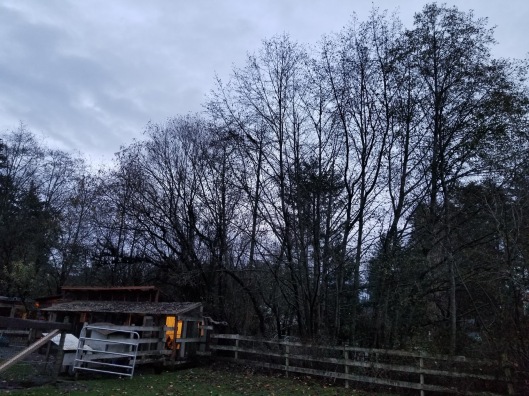 Solstice yesterday, and today’s gentle daylight promises to stick around a little longer. Slowly, inexorably, over the next six months, my much loved cool, silvery grey world will brighten, quicken, surge, harden, crack. The light, waxing insistently, will demand more and more attention, lavishing its deceptive friendly warmth (careful, it can sting!) until by June it reaches zenith. And grateful homage will be duly paid by all manner of chlorophyll-fed life, gathering up the energy that will sustain them through another year.

Then, as if raging against its own dimming, the light will turn on us, browning and burning the thirsty earth even as it reddens the tomatoes and sweetens the melons. And we will eagerly await the fall rains.

Northern human tribes have celebrated the winter solstice for eons, and I am quite aware that my feelings of loss at this time are not widely shared. “How can November be your favourite month!?!” my sister asks, faint disgust tinging her voice. It’s a good question, to which I don’t have the answer.

I am a morning person. I enjoy all the four seasons (although I must work diligently to appreciate summer). Yet I have always been more comfortable in the dark than in the daylight. My favourite childhood summer memories involve playing tag and riding bikes through long dusky purple evenings, streetlights switching on, hoping that Mom would forget to call us in until well after dark. And when I was ten, after our family moved out of the city to the streetlight-free countryside, feeling comforted by the friendly black night keeping me snug and safe. This was where I belonged. When I grew up and got my first city apartment, it was the light I couldn’t stand, not the noise. I got back out to the country as quick as I could.

Once my children were of the age to enjoy bedtime stories, Janice May Udry’s The Moon Jumpers, a simple story involving children playing after dark on a summer evening and joyfully illustrated by Maurice Sendak, was my absolute favourite. I know it by heart. We also enjoyed many ‘night walks’, roaming the neighbourhood well after dark. Did I pass on my love of the dark? I don’t know, you’d have to ask my children.

But there’s nothing to be done, it’s all out of my control, so I shall simply indulge myself with a little solstice sadness, and resolve to savour my dim grey days and dark black nights, before light chases them away for another year.