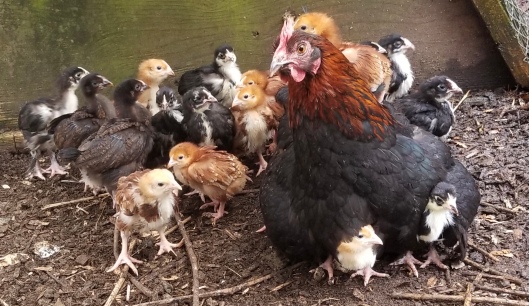 It’s that time of year again, broodies sitting on eggs or raising babies all over the barnyard, with varying degrees of success. Lots of my Marans are broody this year, which is a bit strange. In all the time I’ve kept this breed I’ve only ever had one or two wanna-be mommas. My sister has a Marans broody from my lines, and it appears that now I do too. Except I seem to have seven or eight. Luckily they have mostly been doing a good job, especially for first time moms.

The latest one hatched a surprise Wyandotte x Marans chick last week. It was a surprise because I thought I had put a couple infertile eating eggs under her, to give me time to gather fertile ones and then hatch chicks in the incubator for her to raise. Or at least I thought they were infertile.  I also didn’t realize the placeholder eggs had been under her for quite as long as they had, until one morning I walked into the barn to hear peeping coming from her nest box. Uh oh, we’d had a little accidental hatch, and well ahead of the incubator hatch too. Damn, now I couldn’t give her any extras, her singleton would be a week old when the next group hatched. I would have to do the work of raising that batch myself.

In retrospect, I am glad I didn’t give this Marans any more responsibility than she already had because she turned out to be not particularly interested in mothering. I moved her and the chick out of the nest box into clean quarters, as I do after every hatch, putting them in a large brooder with some two week olds and a heat lamp. After making sure momma was fine with the two week olds, I left them to their own devices.

Over the next few days, little singleton settled right in, playing with the big kids then running under momma’s skirts every time he needed a warm-up. But momma wasn’t happy. She just kept pacing the fence line, all day long. She totally ignored the older chicks, and kind of ignored her singleton. He really had to yell to get her to stay still long enough for him to warm up.

I thought momma might be happier back home, and thus do a better job with her baby, plus I knew from past experience that her baby would be safe with the mostly calm, laid back Marans and olive eggers, so I took them home to her flock, and then carried on with my day.

But at dusk when I went to lock up, what do you think I discovered?  Had indifferent momma made a nest in the fluffy thick shavings I laid down in her preferred corner for that purpose? Was she snuggled in for the night with her baby? No. Of course not. She had hopped up high on a roost, leaving her baby behind on the floor, where he was stomping around peeping pitifully for her to ‘get down here!’

Now the logical next step would have been to take momma and baby out of the Marans coop and put them in a small private brooder, with no roost. And honestly I did think of that first. But when I looked up at the rows of black chickens, preparing to scoop her up, I realized I couldn’t tell which one was momma. And she sure wasn’t talking – none of the 20 black hens looking back at me showed even the slightest interest in the complaining baby below.

So what could I do? I scooped baby up instead and walked him back to where he had come from. He would just have to bunk in with the older chicks, in the only brooder with a heat lamp. 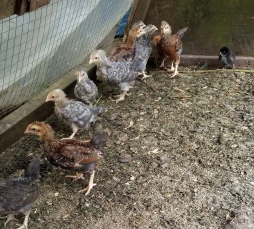 It has been a few days now, and things are going great for little singleton. His bunkmates all snuggle together to sleep, and he just worms himself right into the middle of the pile where I can’t even see him. The heat lamp is only on at night, but he seems to have no problem making it through the day with no momma to warm up under. It helps that it is summer, and that the brooder coop is snug and dry, he can always get in out of the wind. The little guy is actually thriving!  He even has a “bird of a feather” to flock together with, another little black chick who is much bigger than him now, but not for long. 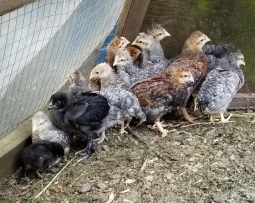 I am pretty impressed with this little guy’s resilience, it’s a talent we could all use lots of in these most eventful days. I hope that I will prove to be as strong and resourceful as my little singleton. It’s sure worth a try anyhow, just look at him go!

Happy Canada Day everyone. And as our most wonderful Dr Henry says…Be kind. Be calm. Be safe. ❤️🇨🇦❤️